Topsail definitely has buzzing bumblebee insects, but this post is about a different one called Operation Bumblebee.

Prior to World War II, only boat access was available to the pristine, 26-mile-long barrier island known as Topsail Island. Area residents frequently made this short trip and picnicked on the sandy shores of the Atlantic Ocean.

At the beginning of World War II, the US built a large, temporary anti-aircraft training base at Holly Ridge and took possession of Topsail Island.

At the end of World War II, the Navy established the US Naval Ordnance Test Facilities at Topsail Island, North Carolina, for Operation Bumblebee, a top-secret, experimental project to develop and test ramjet missiles, which advanced the nation’s jet aircraft and missile programs. Named after a bumblebee, which although aerodynamically unable to fly, does not know this and flies anyway.  This operation lead to the maturing of supersonic aircraft and shipboard missile design in the mid-20th century.

Topsail Island was the first permanent ground for missile testing. The Topsail Island site, placed in operation in March 1947, incorporated rigid structures that were designed and built for specific uses related to the assembly, firing, monitoring, and perfecting of experimental ramjet missiles.  This watercolor is of one of the remaining observation towers built to watch the missiles as they soared into the ocean.

During 18 months’ time, an estimated 200 experimental rockets, each measuring 6 inches in diameter and between 3 and 13 feet in length, were fabricated at the Assembly Building, dispatched to the launch site, and fired along a northeasterly angular deflection of 15 degrees to the shoreline for a maximum clear distance of 40 miles. 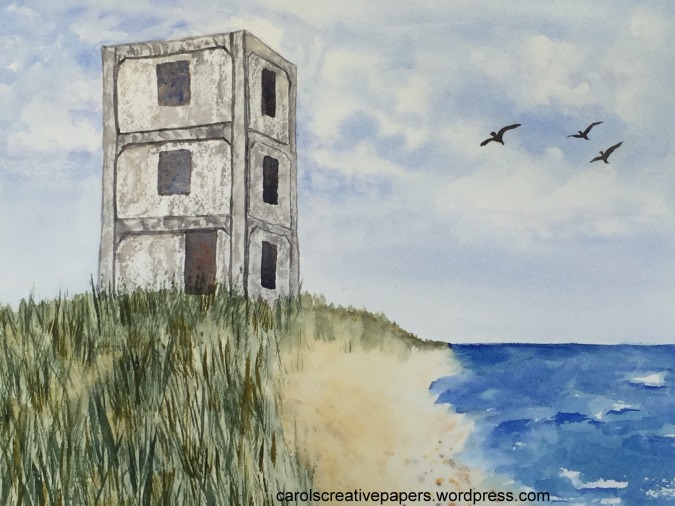 The testing program was dismantled in 1948 and the island was given back to the original owners.  The roads and bridge built by the military were left intact, as were the missile observation towers, and so began the development of the island.

Several missile tracking towers still stand along the island, including a few which have been incorporated into the floor plans of beach homes. This tower is near Surf City, (I believe it is Tower No. 3), and although it has fallen into disrepair it holds an amazing history.   I’m not sure that it qualifies as a #NatureDoodlewash, but it certainly is an inherent part of this island.

14 thoughts on “Topsail and Bumblebees”

This site uses Akismet to reduce spam. Learn how your comment data is processed.